“For his significant contributions to imaging and understanding the spatiotemporal development and function of bacterial multicellular behaviors, ranging from collective motion to bacterial biofilm communities.”

Knut Drescher is currently both a professor of biophysics at the Philipps-Universitaet Marburg and a Max Planck Research Group Leader at the Max Planck Institute for Terrestrial Microbiology in Marburg, Germany. Knut received his undergraduate education in physics at the University of Oxford from 2003-2007, before completing a PhD in biophysics at the University of Cambridge in 2011, where he pioneered measurements of flow fields around microorganisms and their hydrodynamic interactions. He became interested in bacterial multicellular behaviors and molecular biology during his postdoctoral fellowship at Princeton University, in the Department of Molecular Biology from 2011-2014. In 2014, Knut Drescher moved to Marburg, Germany, to take up his current positions.

Knut’s work focuses on understanding the morphogenesis of bacterial communities, and the evolutionary fitness consequences of life within bacterial communities. His work combines genetics, biochemistry, and biophysical techniques to explore molecular, physical, and evolutionary mechanisms underlying bacterial behaviors within communities. Most recently, he has developed live-cell imaging techniques for biofilms and swarms that simultaneously capture the single-cell dynamics and community dynamics, thereby facilitating major new insights into bacterial collective behaviors. “For her significant contributions to applying fundamental principles of thermodynamics to experimental nonequilibrium biological systems, and advancing our understanding of how molecular-scale non-equilibrium processes are manifest in the system dynamics at larger scales.”

Nikta Fakhri is Thomas D. and Virginia W. Cabot Career Development Assistant Professor of Physics at MIT (Cambridge, MA, USA). She completed her undergraduate degree at Sharif University of Technology, Tehran, Iran and her PhD at Rice University (Houston, TX, USA) in 2011. She was a Human Frontier Science Program postdoctoral fellow at Georg-August-Universistät in Göttingen, Germany where she pioneered the use and development of fluorescent single-walled carbon nanotubes as probes in soft matter and biophysics. At MIT, her lab focuses on identifying underlying principles of collective dynamics and complex spatiotemporal patterns in far from equilibrium biological systems. 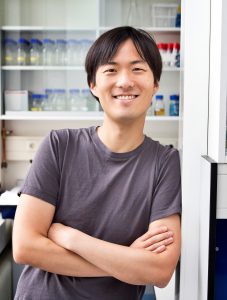 “For his elegant demonstration of how statistical physics, dynamical systems theory and experiments can be combined to address fundamental questions in cell biology, and his recent work that shows how cell-cell communication can shape the spatio-temporal dynamics of living cells.”

After his undergraduate studies in Physics and Mathematics from 2000-2004 at the Victoria College in Toronto, Canada, Hyun Youk moved to Johns Hopkins University in Baltimore to continue his studies in Astronomy and Physics from 2004-2006. In the following years, he did his PhD in Physics and Systems Biology under the guidance of Professor Alexander van Oudenaarden investigating glucose sensing and import in yeast cells at the MIT in Cambridge before he went in 2011 as postdoctoral fellow to the laboratory of Wendell Lim at the University of California in San Francisco where he studied autocrine signaling, one of the three major forms of cell-cell communication. In January 2015, Hyun Youk moved to Europe with a European Research Council (ERC) Starting Grant, and is since then establishing his own research lab as assistant professor of Physics and Quantitative Biology at the Kavli Institute of Nanoscience, TU Delft, in the Netherlands, where he continues with developing his ideas based on statistical physics and dynamical systems and experimentally demonstrating them in cells. A hallmark of Professor Youk’s work is that he selects important and highly complex biological problems that he then systematically deconstructs to extract fundamental design principles that underlie living systems, which are based on physical principles. Dr. Siyuan Steven Wang did his PhD work 2008-2011 in Molecular Biology at Princeton University under the supervision of Professor Ned Wingreen and Professor Joshua Shaevitz where he studied the mechanics, dynamics and organization of the bacterial cytoskeleton and the cell wall. His PhD thesis was honored with the Outstanding Doctoral Thesis Award in Biological Physics by the American Physical Society. In advance of his PhD period, he completed his undergraduate studies in Physics at Peking University under the supervision of Professor Qi Ouyang in 2007 with highest honors. In 2011, Dr. Wang moved to Prof. Xiaowei Zhuang’s lab at Harvard University to study chromosome structures in eukaryotic cells. He developed a ground breaking imaging technology for tracing chromatin in individual chromosomes circumventing the image resolution problem and enabling 3D tracing of chromosomes. The application of this novel method in chromosome conformation and other studies lead to several publications in high-impact journals in addition to this technology breakthrough. 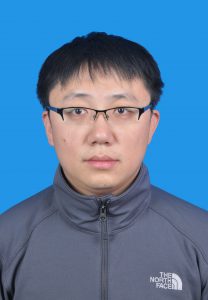 “For his significant contributions to the area of single-molecule biophysics. He pioneered the development of single vesicle fusion assays based on FRET, which enables addressing many fundamental questions about biological systems involving membranes.”

After finishing his undergraduate studies of Physics with the Master Degree from George Washington University in May 2005, Dr. Jiajie Diao moved to the University of Illinois at Urbana-Champaign. There, he started his PhD in Physics under the guidance of Professor Taekjip Ha and studied membrane fusion through single-particle biophysical fluorescent techniques. After completing his five years PhD study in December 2010, he joined the lab of Professor Axel T. Brunger, first as postdoctoral research associate and later as research specialist at Stanford University & HHMI where he further improved his outstanding publication record with more articles on his membrane fusion research in high-ranking journals.  Since the end of 2015, Dr. Diao started to establish his own biophysical lab at the University of Cincinnati, College of Medicine where he is leading several projects that are aimed at understanding the fundamental principles of neurotransmitter release and the effect of neurodegeneration on this process.