“For his outstanding theoretical and observational work on star-planet interaction and atmospheric escape, which has led to the first live insights into the erosion of atmospheres of low-mass exoplanets, the coupling between the atmospheric and orbital evolution, and innovative techniques to exploit exoplanet observations to bring new insights on stellar physics.” Vincent Bourrier was born in 1987 in Nice, France. His first experience of research was as a graduate assistant in 2009-2010, when he helped design an optical benchtop simulator for the LISA mission (at the Laboratoire AstroParticule et Cosmologie in Paris, France) and performed mesoscale simulations of the Martian atmosphere to prepare the ExoMars landing (at the Laboratoire de Météorologie dynamique in Paris, France, and at the Open University in Milton Keynes, UK). In 2011, he obtained a Masters degree in Astrophysics, Space Sciences & Planetology, and an engineering degree in Space Sciences & Techniques from Paul Sabatier University and the Institut Supérieur de l’Aéronautique et de l’Espace (SUPAERO), France. His doctoral research, carried out at the Institut d’Astrophysique de Paris (CNRS, Paris VI University, France) from 2011-2014, focused on two topical aspects in the exoplanet field. On the one hand, he studied signatures of atmospheric escape in spectroscopic observations obtained with the Hubble Space Telescope, and developed a numerical model of exoplanet upper atmospheres to understand how this process depends on interactions between planets and their host stars. On the other hand, he pushed forward the study of orbital architectures (the shape and orientation of a planet’s orbit around its star), as a way to determine how exoplanets can come to orbit extremely close to their star.

Dr. Bourrier is now working as a Research and Teaching Fellow in the Department of Astronomy of the University of Geneva, where he combines his two research interests to understand the interplay between the atmospheric and orbital evolution of exoplanets. He contributed to the detection of gigantic exospheres around Neptunes-size planets close to their star, measuring their erosion rate and demonstrating the central role of atmospheric escape in the demographics of exoplanets. His work pioneered the measurement of orbital architectures around cool stars, revealing that one of these eroding Neptunes orbit over the poles of its M dwarf star. This peculiar architecture suggests that the planet was brought close to its star long after its formation via interactions with an outer companion, the increased stellar irradiation triggering its atmospheric escape. These results open new areas of research to determine the processes that sculpt the population of exoplanets close to their stars.

“For pioneering contributions to the extraction of cosmological insights from large galaxy surveys, including modeling key observables, covariance matrix estimation, and the development of cosmological analysis tools, which have ushered in a new era of multi-probe cosmology and set a new standard for forthcoming experiments.” Elisabeth Krause is an assistant professor in the department of physics and the department of astronomy at the University of Arizona. She received her Diploma in physics from the University of Bonn in 2007, and her PhD in astrophysics from Caltech in 2012. After postdoc positions at the University of Pennsylvania, Stanford, and JPL/Caltech, she joined the faculty at the University of Arizona in 2018. Dr. Krause‘s research combines theoretical cosmology and data analysis, with focus on interpreting measurements from large galaxy surveys. She pioneered joint cosmological analysis techniques that combine highly correlated tracers of the universe’s large scale structure and has held several leadership positions in cosmology survey collaborations. She currently co-chairs the science committee of the Dark Energy Survey. Her honors and awards include a Department of Energy Early Career Award in 2019, and the 2020 Maria Goeppert-Mayer Award of the American Physical Society.

“For her work as a theorist, combining analytic theory, numerical simulations and data interpretation, which has significantly contributed to building tantalising bridges between fields as diverse as astrophysics, particle cosmology and astrobiolog.”

The 2017 IUPAP Young Scientist Prize in Astrophysics was awarded to Pratika Dayal, “who combines great insight with an unquenchable desire to understand the Universe. Combining analytic theory, numerical simulations and data interpretation, her research has significantly contributed to building tantalising bridges between fields as diverse as astrophysics, particle cosmology and astrobiology.” 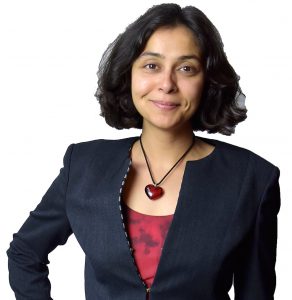 was born in 1984 in Chandigarh, India. She received a Masters degree in Astronomy from the University of Sussex in 2006, where she studied the triaxiality of elliptical galaxies. Her doctoral research, carried out at the International School for Advanced Studies (SISSA, Trieste) from 2006-2010, focused on modelling galaxies in the first billion years to put robust constraints on the end stages of reionization and unveiling their physical properties. She then held postdoctoral fellowships at the Leibniz Institute for Astrophysics (Potsdam, Germany) and the Institute for Astronomy (Edinburgh, U.K.) where she combined the latest datasets and theoretical models to show that the earliest galaxies observed by the Hubble Space Telescope could be the smallest progenitors of galaxies like our own Milky Way. She then moved to the Institute of Computational Cosmology (Durham, U.K.), to take up an Addison Wheeler fellowship, where she opened up new lines of astrobiological research, ranging from modelling the habitability of the Milky Way to that of the entire Universe over 13 billion years.

Since 2016, Pratika Dayal has held an assistant professorship and Rosalind Franklin Fellowship at the Kapteyn Astronomical Institute at the University of Groningen where she is leading calculations for the for the forthcoming era of 21cm cosmology with the Square Kilometre Array. In addition to support from the University of Groningen, since 2017 her group has been supported by the European Research Council’s starting grant. 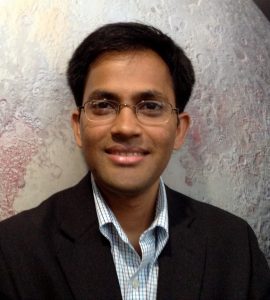 Dr. Nikku Madhusudhan was born in 1980 in India and pursued his undergraduate studies at the Indian Institute of Technology, Banaras Hindu University, in Varanasi, India. He then went to the Massachusetts Institute of Technology (MIT) in Cambridge, Massachusetts, USA, where he obtained a masters degree in engineering in 2004 and a PhD in Physics (astrophysics division) in 2009. After his PhD, he held postdoctoral positions at MIT (2009-2010), Princeton University (2010-2011), and Yale University (2012-2013) where he was the YCAA Prize Postdoctoral Fellow. In 2013, he joined the faculty of the Institute of Astronomy at the University of Cambridge, UK, as a university lecturer in astrophysics. In 2017, he was promoted to a tenured Readership (equivalent associate professorship) in astrophysics and exoplanetary science at Cambridge.

Dr. Madhusudhan has made several seminal contributions to the study of exoplanetary atmospheres over the past decade. His PhD work gave birth to exoplanetary “atmospheric retrieval”, which allows statistical estimation of atmospheric properties of exoplanets from their observed spectra. This work and its variants have made possible detailed measurements of atmospheric chemical abundances and temperature profiles of various exoplanets and sub-stellar objects ever since. His work led to the first statistical constraints on atmospheric chemical abundances, temperature profiles, non-equilibrium chemical processes, etc, in numerous objects. In another major development, in a series of papers in 2011-2012, he demonstrated the feasibility of measuring carbon-to-oxygen (C/O) ratios in hot giant exoplanets and demonstrated the critical implications of C/O ratios for various atmospheric and interior properties of exoplanets. These works have galvanized intense activity both in theoretical and observational studies to investigate C/O ratios in exoplanets and sub-stellar objects, and the C/O ratio has emerged to be the most desirable observable in exoplanetary atmospheres with upcoming large facilities such as the JWST. Among other results, his work also suggested unexpectedly low H2O abundances in several hot Jupiters. Such chemical measurements have motivated new interdisciplinary efforts for connecting exoplanetary atmospheric compositions to their formation processes, a frontier area where Dr. Madhusudhan has also played a pioneering role in recent years.

Dr. Madhusudhan’s scientific contributions and leadership role have been widely recognized in exoplanetary science and astrophysics. His work has been recognized with the Yale YCAA prize fellowship in 2011 and the 2014 Vainu Bappu Gold Medal in astrophysics in 2016, followed by the present 2016 IUPAP Medal in astrophysics, besides numerous invitations to seminars/colloquia/conferences, review talks/papers, and large projects.

The 2015 IUPAP Young Scientist Prize in Astrophysics was awarded to Sylvain Guiriec for his “insightful and innovative contributions towards understanding the nature of Gamma Ray Burst (GRB) prompt emission, in particular the establishment of multi-component spectra, and the discovery of a new Peak Energy – Luminosity relation showing that GRBs can be used as standard candles and thereby as unique cosmological probes.” iriec was born in 1978 in Brest, France. In 2002 – 2003, he obtained a Masters degree in Material Sciences as well as an Engineering degree in Atomic and Molecular modeling and simulation, and computational structural analysis and design from the Institut Superieur des Materiaux du Mans, France. He worked for two years as a young researcher at the Oak Ridge National Laboratory, USA, and at the Universitat Politecnica de Catalunya, Spain, where he studied radiation damage for the nuclear research field. In 2004, he obtained a Masters degree in Astrophysics, Planetology and Space Sciences & Techniques and an Engineering degree in Space Sciences & Techniques from Paul Sabatier University and the Institut Superieur de l’Aeronautique et de l’Espace (SUPAERO), France. He received his PhD in December 2007 in Astrophysics from the Montpellier II University, France. His thesis was both theoretical and instrumental: (i) he studied the theoretical aspects of GRBs and made predictions of observability with the Fermi Gamma-ray Space Telescope (Fermi), and (ii) he participated to the integration and tests of the Fermi/Large Area Telescope (LAT), for which he developed an algorithm for suppressing its proton background.

After the launch of Fermi mid-2008, Sylvain Guiriec joined the National Space Science and Technology Center, USA – associated to the NASA Marshall Space Flight Center – with a 3-year postdoctoral position at the University of Alabama in Huntsville, USA. His main efforts focused on the observational analysis of GRBs, leading to the discovery of the first clear evidence for photospheric emission in their prompt emission. He also worked on Magnetars, Solar Flares and Terrestrial Gamma-ray Flashes. Since 2011 Sylvain Guiriec worked at NASA Goddard Space Flight Center, USA, first as a fellow of the NASA Postdoctoral Program and then as an Assistant Research Scientist affiliated with the University of Maryland, College Park and the Center for Research and Exploration in Space Science & Technology.

The 2014 IUPAP Young Scientist Prize in Astrophysics was awarded to Nanda Rea for her “her valuable contribution to the study of neutron stars. In particular for the discovery that magnetars can have low dipolar magnetic fields in line with the normal pulsar population, at variance with the long-standing belief that the electron critical magnetic field was a lower limit for magnetar-activity to take place.” 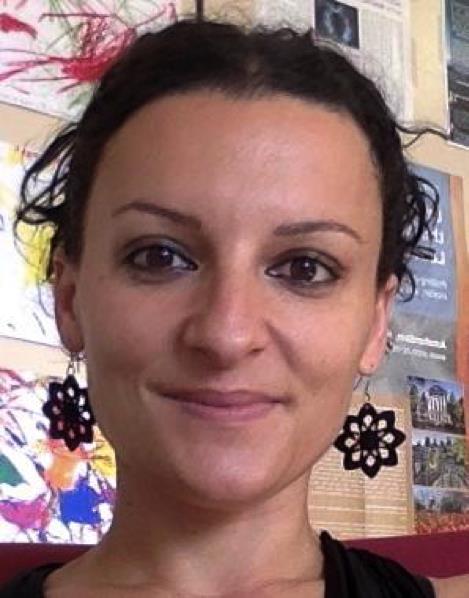 Nanda Rea was born in 1978 in Rome, Italy. She graduated from the University of Tor Vergata/INAF- Astronomical Observatory of Rome in 2006. Since then she spent several years with different post-doctoral fellowships (at SRON and The University of Amsterdam). In 2009 she started a 5 year tenure-track at the Institute for Space Sciences (ICE) in Barcelona, part of the CSIC (the Spanish National Research Council). In 2014 she was awarded an NWO Vidi grant to build a research group in The Netherlands. She is currently a tenured staff scientist at CSIC, and a research group leader at the Anton Pannekoek Institute of the University of Amsterdam.

Since her PhD years, Nanda Rea has worked on several aspects of neutron stars, both observationally and on the interpretation side. She was invited for colloquia and seminars in many worldwide institutes (Harvard, NYU, Max Plank, University of Sydney, ATNF, IAC, and others). In 2014 she was awarded the Zeldovich Medal for Astrophysics and Space Science from COSPAR and the Russian Academy of Science, for her crucial contribution to the understanding of neutron stars with strong magnetic fields.